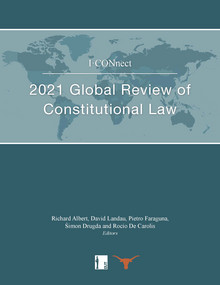 There has been an unusually rich array of events and developments of constitutional significance in the past year. Part II recounts a series of ‘firsts’, among others the appointment of the first Indigenous Governor General of Canada, the appointment of the first person of colour to the Supreme Court of Canada and the first use of the ‘notwithstanding clause’ by the government of the most populous province of Canada. Part III begins with a report of what is probably the most politically and constitutionally momentous case of the past decade, References re Greenhouse Gas Pollution Pricing Act, in which the Supreme Court dismissed a series of constitutional challenges to the federal ‘carbon tax’ legislation. The second case, Toronto (City) v Ontario (AG), marks the final chapter of the controversy surrounding the redrawing of Toronto’s electoral boundaries midway through the municipal election campaign. Finally, the report concludes with the uncommon Supreme Court case of two persons convicted of an offence that had already been declared unconstitutional in 2013.