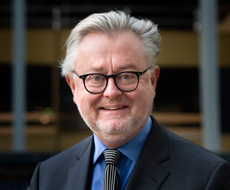 “After two years of French in my high school of Toronto, I was linguistically challenged when I began my law studies at Université de Montréal. A few months in, I was able to follow the elegant French of my professors. However, understanding my classmates during coffee breaks was a deal more challenging, both in time and efforts! I received good marks in tax and bankruptcy law and mastered the difference between movables and immovables by destination, but international law became my passion from the very start. My deepest thanks to the Faculty for enriching my life with international law and the French language.”

Professor Schabas was made an Officer of the Order of Canada in 2006 and a Fellow of the Royal Irish Academy in 2007. He was also the recipient of the Vespasian V. Pella Medal for International Criminal Justice of the Association internationale de droit penal, and the Royal Irish Academy Gold Medal in Social Sciences. He currently serves as Chair of the International Institute for Criminal Investigation and was among the three international members to sit on the Truth and Reconciliation Commission for Sierra Leone. In addition, Professor Schabas was Dean of the Département des sciences juridiques at Université de Québec à Montréal. Finally, he drafted the Quinquennial Report of the UN Secretary-General on capital punishment in 2010 and 2015.