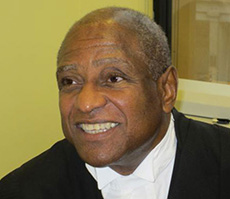 A native of Haiti, Harry Pierre-Étienne enrolled at the Faculty of Law at the Université de Montréal in 1979 despite losing his eyesight at the age of eighteen. He obtained his law degree in 1983 and was a founding member of the Association des étudiants handicapés (Association of disabled students) at the Université de Montréal. Rejecting the “blind attorney” label, after passing the Quebec bar in 1986, he was appointed Crown prosecutor. He was the first blind attorney to practice before judge and jury in a Quebec court. He is a co-founder of the Association des avocats et notaires noirs du Québec (Association of black notaries and lawyers of Quebec) of which he was Chair from 1996 to 1999. In 1998, he was awarded the Honorary Citizenship from the City of Montreal. Pierre-Étienne is a true model of perseverance. His son Jonathan also graduated from the Faculty in 2012.

Faculty of Law of the Université de Montréal