First black person to be appointed to the bench in Quebec 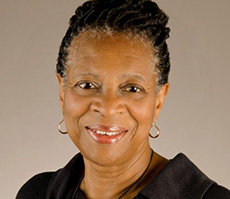 Originally from Guyana, the Honourable Juanita Westmoreland-Traoré was the first black person to be appointed to the bench in Quebec in 1999 (Court of Quebec). A graduate from the Faculty of Law at the Université de Montréal—and the only black student in her class—Madam Justice Westmoreland-Traoré also earned a Bachelor of Arts from Marianopolis College, and a Doctorate of Public Law and Administrative Sciences from Université de Paris II. She has left her mark in the legal community by her involvement in various organizations such as the Office de protection des consommateurs du Québec, the Canadian Human Rights Commission, the Congress of Black Women of Canada (where she served as legal counsel), and the Negro Community Centre, in addition to being appointed Dean of the Faculty of Law at the University of Windsor. Actively engaged in the fight against discrimination, she was awarded the Rights and Liberties Award from the Commission des droits de la personne et de la jeunesse in 2008. Through her achievements and strength of character, Madam Justice Westmoreland-Traoré is a shining example, both for the black community and the Canadian legal community.

Executive Committee of the AENDUM