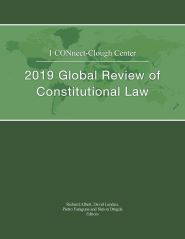 Except in criminal procedure, the Supreme Court decided less constitutional cases in 2019 than in previous years. The three selected for this report deal with the following questions: (i) the right to vote of long-term non-resident citizens in federal elections; (ii) the concurrent application of provincial environmental protection laws and federal bankruptcy laws to spent oil and gas sites; and (iii) the availability of habeas corpus to federal immigration detainees. However, probably the most constitutionally significant development of the year originates from the enactment of An Act Respecting the Laicity of the State, in which the government of the province of Québec decided to invoke the famous ‘notwithstanding clause’ of the Canadian Charter of Rights and Freedoms. The ensuing legal challenges to the Laicity Act add to a number of highly politicized cases that are working their way up to the Supreme Court (or are already pending), giving the nine justices opportunities to revisit and reshape important parts of the constitution and Canadian policy in the near future.