Judge at the Superior Court of Justice of Quebec 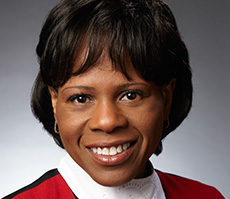 Originally from Haiti, the Honourable Guylène Beaugé is the first black person to be appointed judge at the Superior Court of Quebec. A Graduate from the Faculty of Law at the Université de Montréal in 1984, this exceptional woman is actively involved in the legal community and was named the 2007 “Personality of the Year” by La Presse and Radio-Canada. Beaugé also holds a Bachelor of Arts in Philosophie (honours) from Collège Marie-de-France. During her career, she chaired the Committee on Justice and Equality at the Centre for Research Action on Race Relations, as well as the Quebec Division of the Canadian Bar Association. She also worked at the Department of Justice and the Treasury Board, in addition to being a member of the Canadian Institute for the Administration of Justice.

Executive Committee of the AENDUM